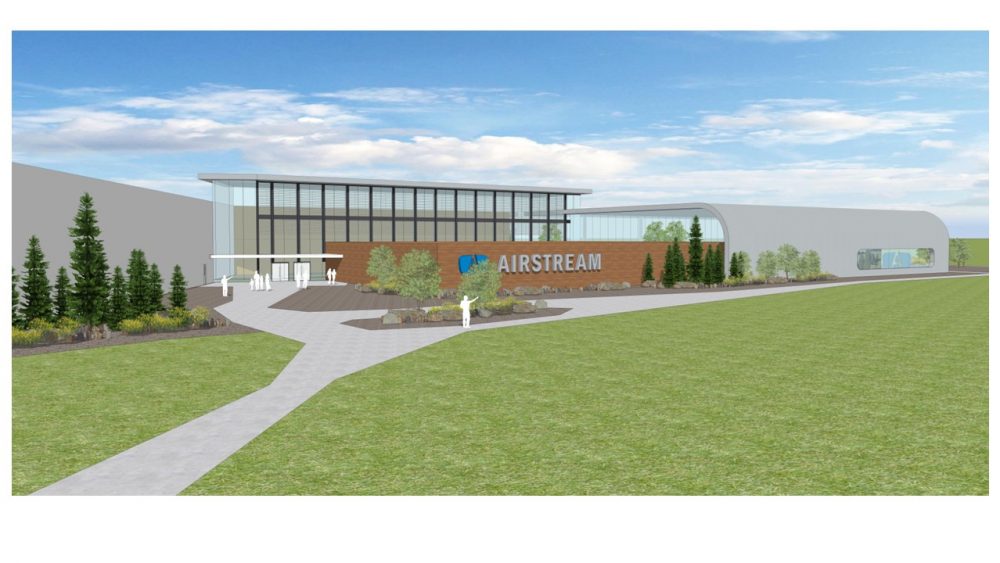 The $40 million project to create a new 750,000 square-foot facility, which will also be completely powered by renewable energy credits, is set to break ground in late spring 2018 with completion expected in 2019. This expansion is the latest example of Airstream’s long-standing commitment to continuous innovation, quality control, and its Made in America philosophy. As a result of this investment, the craftspeople at the heart of Airstream’s assembly process will have more production space to make the world’s most iconic recreational vehicle.

“We embrace our rich history even as we move into the future,” said Airstream President & CEO Bob Wheeler. “This new facility will give us the room to build and innovate quality products, all while maintaining the hand-made craftsmanship that makes Airstream an American icon.”

The plant expansion will consolidate multiple production spaces into one facility, bringing the assembly of the company’s travel trailers under one roof. The current 255,000 square-foot travel trailer plant will be converted for use building Airstream’s motorized touring coaches, freeing up production space to support a growing line of products that appeal to a broad spectrum of RV enthusiasts.

“The RV industry is enjoying a golden age as a new generation of Americans discover the joys of outdoor adventure with all the comforts of home,” said Bob Martin, President and CEO of Airstream parent company Thor Industries. “The expanded Airstream facility will provide top quality products to these new devotees for years to come.”

As a result of the expanded capacity, Airstream expects to hire additional associates, bringing total employment in Jackson Center to around 1,200 people. A state-of-the-art training center in the new factory will provide Airstream and dealer associates with a hands-on shop floor environment for earning certifications, learning new skills, and mastering new production and maintenance techniques. All of this is designed to improve the experience of Airstream customers.

“The workforce here in Shelby County is second to none,” said Wheeler. “We couldn’t be happier reaffirming our 65-plus year commitment to Jackson Center. In addition, the State of Ohio is a great place to do business and their continued commitment to Airstream made this an easy decision.”

Airstream’s expansion will provide another boost to the Dayton economy, which saw approximately $1 billion in capital investment last year. Local employers like Airstream are responsible for some 80 percent of the region’s recent economic growth, and they’ve helped raise the median wage in Shelby County to above $54,000 a year.

“This expansion by Airstream’s parent company, Thor Industries, will bring 280 new jobs to the Jackson Center campus, where Airstream will continue to produce recreational vehicles that loyal customers have enjoyed for nearly a century,” said JobsOhio Senior Managing Director for Automotive Kristi Tanner. “Along with the Dayton Development Coalition and our local partners, we are excited that Ohio will continue to play an essential role in Airstream’s growth worldwide.”

“This announcement by Airstream is still more proof that Shelby County is a manufacturing stronghold in Ohio,” said Mike Dodds, Executive Director of the Sidney-Shelby Economic Partnership. “Growth-oriented companies like Airstream are one reason we have the highest percentage of manufacturing jobs per capita in the state.”

Jeff Raible of the Sidney-Shelby Chamber of Commerce said the announced expansion “combines the excitement of a new opportunity with the proud heritage of a longtime member of our business community.”

“In every way possible, the resources of the Sidney-Shelby County Chamber are committed to helping Airstream continue its growth and prosperity,” Raible said.

“The entire Village Council, the Village Administrator, and I are proud of the work Jackson Center did to create the best possible conditions for this expansion,” said Jackson Center, Ohio Mayor Scott Klopfenstein. “As a former Airstream associate myself, I’m particularly pleased to know they’ll be here creating jobs for years to come.”

Airstream’s current Jackson Center facility has long been a popular destination for Airstream owners and other tourists seeking a glimpse inside the company’s hand-made manufacturing process. A new Heritage Center will enhance those visits with exhibits illustrating the company’s 87-years of inspiring adventure and help drive regional tourism in nearby communities. Plans call for the display of numerous classic and historic Airstream products, including artifacts from the relationship between Airstream and NASA’s space program.

Airstream began operating in Jackson Center, Ohio in 1952. The current plant was built in 1971. The Jackson Center campus has been Airstream’s sole manufacturing location since 1979.