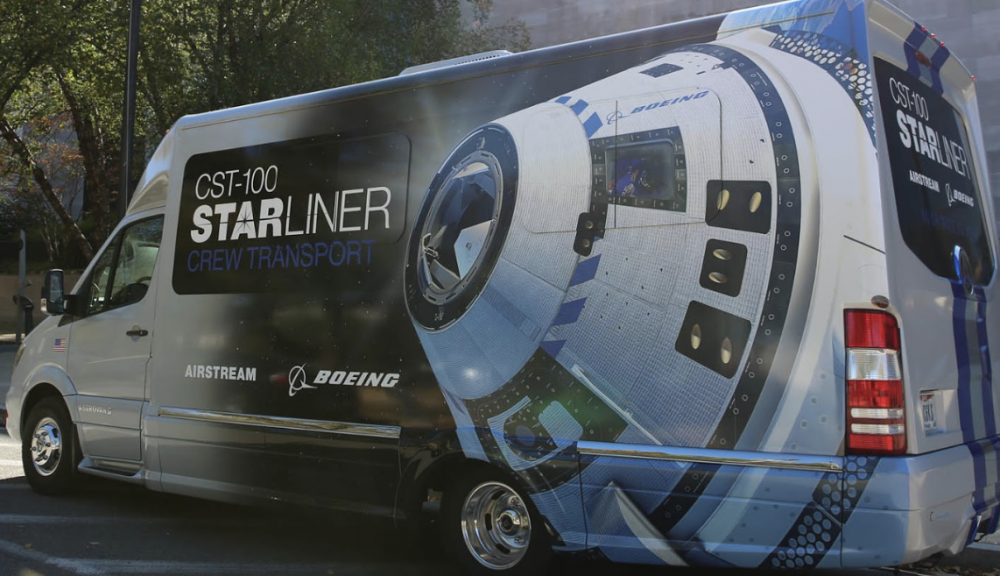 JACKSON CENTER, OH — (October 21, 2019) — Airstream, innovative maker of the iconic “Silver Bullet” travel trailer, today announced the launch of its one-of-a-kind Astrovan II in partnership with Boeing. As part of Boeing’s Commercial Crew program, the Astrovan II will transport astronauts to the launchpad of the CST-100 Starliner spacecraft. The first crewed launch of the CST-100 Starliner is scheduled for 2020, following an uncrewed mission in December 2019. It will carry three astronauts to the International Space Station.

This project continues Airstream’s 50-year history supporting the nation’s space programs. In February 2018 Airstream, Boeing, and NASA began discussions to build the eight seat transport vehicle. Astrovan II is built on a modified Airstream Atlas Touring Coach and was handcrafted by the men and women at Airstream’s production facility in Jackson Center, Ohio.

“We are honored to have had the opportunity to partner with Boeing and continue the long-standing relationship with our country’s space programs that began with the Apollo 11 launch,” said Bob Wheeler, CEO and President of Airstream. “The original Astrovan played an important role in America’s Space Shuttle era. Many will remember seeing that familiar silver bullet exterior heading out to the launchpad at Kennedy Space Center. We’re excited for Astrovan II to continue Airstream’s part in helping put Americans into orbit.”

Over the years, the sight of Airstream’s shiny silver exterior and bold NASA emblem evoked pride and excitement for many of those who watched it approach the launch pad at NASA’s Kennedy Space Center in Florida. Since 1984, each shuttle crew has traveled those nine miles, from the crew quarters to the launch pad, aboard the same vehicle; a modified Airstream Excella commonly referred to as the “Astrovan,” which is currently on display at NASA’s Kennedy Space Center Visitor’s Complex next to the Space Shuttle Atlantis.

Airstream began its role in supporting America’s space exploration efforts starting in 1969 – the year Apollo 11 made the first moon landing. Fearing that disease would spread upon the astronauts’ return, Airstream was tasked to build a Mobile Quarantine Facility (MQF) for Neil Armstrong, Buzz Aldrin and Mike Collins. A total of four MQFs were built by Airstream, three of which were used in Apollo 11, Apollo 12, and Apollo 14 missions.

For more information on the Astrovan II, please visit www.airstream.com.

With corporate offices in Chicago, Boeing employs more than 153,000 people across the United States and in more than 65 countries. This represents one of the most diverse, talented and innovative workforces anywhere. Our enterprise also leverages the talents of hundreds of thousands more skilled people working for Boeing suppliers worldwide.